“Eureka” fans rejoice!  Sheriff Jack Carter’s rebellious genius daughter is a lover of ink in real life.  She makes absolutely NO secret of how she feels about tattoos in the main banner for her Twitter page:

(You can follow her Twitter here:  http://twitter.com/jordandanger)
At the current time, it appears that she has five different tattoos on her body (Editor’s Note:  Jordan made sure I knew she actually currently has 7.  The first one that anyone would be quick notice would be this interesting looking owl on the inner bicep of her left arm:

Of course, if you notice her owl tattoo, you will also notice some writing on her wrist.  I have not been able to locate a clear picture of what the complete phrase is, but it goes like this “….. to live”:

The same photos at the premier for “A Very Harold and Kumar 3D Christmas” that showed off her wrist tattoo also show a dainty design behind her right ear which appears to be the logo for Coco Chanel:

Other photo sets of her show a design of some kind just below her neck, though I confess to not being able to determine what this one means either:

Finally, it appears her most recent encounter with the tattooist’s needle has resulted in a quote along her rib cage (rib cage tattoos being some of the more trendy ones these days, for either words or flowers).  The first pic shows her full body with the tattoo visible.  The second is an up-close one of the tattoo which shows what it actuallys says:

Given Jordan’s professed love of ink, I would say it’s highly unlikely that she is going to stop at just 7 tattoos.  However, she seems to have put some good thought into the design and placement of the ones she has, and they all appear appropriately feminine for her.  She will do well if she keeps tattooing with this thinking in mind.
Posted by Unknown at 09:22 No comments:

Harry Styles
Harry Styles loves his mom so much he was willing to get inked for her. The One Directionband member revealed a new tattoo that he got on his arm and it’s a tribute to his mom. Already sporting several tattoos, the artist seems to love his different pieces of body art and adding another definitely wasn’t too hard. On Thursday the star was showing off his ink to the fans waiting to see the group outside of a London office.
The tattoo is a letter “A” marked on the arm and is said to be the first initial of his mother’s name Anne Cox. The small letter is in the middle of his forearm is very small but definitely unique, but simple. The remembrance definitely is one that is a loving tribute to Harry Style’s mom.
The tattoos of Harry Styles definitely have piqued the fans interest in the past. With several tattoos on his arms that are seen when he performs on with One Direction stage, the fans are definitely interested in ink that he finds very special to show off.
Posted by Unknown at 01:40 No comments:

We hope you're sitting down for this breaking celebrity news, THG readers: Miley Cyrus has a new tattoo on her arm. Of a Theodore Roosevelt quote, obviously.
While heading out of a West Hollywood Pilates class on Tuesday, Cyrus sported her new ink, quoting "Citizenship in a Republic" by the former U.S. president.
The excerpt from the 1910 speech on Miles' forearm reads: "So that his place shall never be with those cold, timid souls who knew neither victory nor defeat." 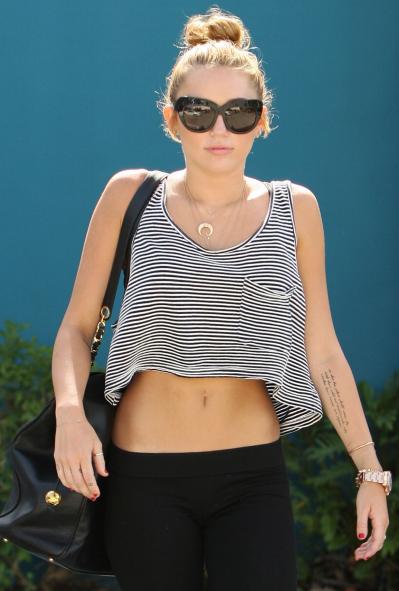 No word if the Miley Cyrus tattoo man plans on adding similar ink in honor his young idol, but Miley isn't alone in finding inspiration in Teddy's words.
That particular speech of Roosevelt's moved both Richard Nixon and Nelson Mandela, who quoted from it during pivotal moments in their own careers.
Nixon referenced it during his resignation, while Mandela used it to inspire South Africa's rugby team to beat New Zealand at the historic '95 World Cup.
Miley, meanwhile, will presumably use it at some point to send a stirring Tweet to her fans. She has not done so yet, amazingly ... give it 45 minutes.

Are you looking for something fun and different to offer your guests? Are you ready to offer one of the most exciting and trendy forms of entertainment? Do you want a unique party flavour that will keep your guests wanting more? Airbrush Temporary Tattoos are fun for all ages and a perfect addition to any party or event. We also have airbrush designs for faces which will last Much longer than traditional face paints.

We are a mobile business, which can easily fit into any setting, as we can bring our own electric. We are a family owned business and pride ourselves on the excellent service that we provide to all our customers. Your satisfaction is our top priority and we are committed to providing a safe family-oriented and fun experience.

Here is how it works:
You determine the number of hours you would like for us to entertain your guests (1hr min)
We arrive and setup prior to the start time of your party/event
We apply unlimited airbrush tattoos during the time period specified
Guests can choose from over 800 designs
A single artist can apply on average about 20 tattoo's per hour for basic designs
Additional airbrush tattoo artists are available
The price we quote is the price you pay
Availability is limited, so please plan ahead


If you are interested in finding out more, simply contact us to determine availability and current rates. Party & Event Planners are welcome.


Send us an email to book or for more details  events@whizztattoos.co.uk
Posted by Unknown at 09:52 No comments:

Inked
The "Jersey Shore" stars are no stranger to rebellion; with their incessant binge drinking, partying, and occasional rough-housing, getting a tattoo is certainly in the mix of their favorite activities. Co-star of the latest "Jersey Shore" spin-off, "Snooki and JWoww", Jenni JWoww Farley flaunts her newest tattoo on the latest issue of Inked magazine.
Farley is already known for her mini-tattoo collection. She has a dragon across her ribcage, a rose and wings with the German word "Opa" (meaning grandmother; the star pays homage to her late grandmother), and praying hands and a cross on her right upper back. Her latest addition - a tiger sprawled across her right thigh.

The "Jersey"-girl debuts her new ink on the magazine's cover wearing nothing but a bikini bottom, a cropped tank, and heels, while getting soapy washing a car.
The 26-year-old explains that the tiger represents a balance between good and evil. The dragon on her left side represents evil while the tiger on the right represents good.  Another interesting fact about the new tattoo is that it was done by her college advisor. Farley told Inked, "He was an art student, but he's also been tattooing for 10 years."
All of Farley's inks are strategically placed in areas that can be easily covered. She said, "I want to be able to show my tattoos off when I want to, and I want to be able to cover them when I don't."
Celebrity tattoos always hold dramatic or intriguing meanings. Rihanna, for instance, is notorious for her cryptic yet innovative body ink (her latest one cause quite a big stir). Take a look at other celebrities with wild tattoos.

The Craziest Fan Tattoos Ever Seen

Thanks to Miley Cyrus Tattoo Guy (MCTG, for short?), we’ve been unable to stop noticing crazy celebrity tattoos on the Interwebs. So hide yo kids, ‘cause these folks are taking fandom to a permanent (and terrifying!) place:

Demi Lovato
We’re all true Lovatics, but even still, you’d think a true fan would get a tattoo that actually looks like Demi !Maybe “Skyscraper” really spoke to this guy?

Glee
We hope these Gleeks are just as thrilled with their lip wear after the last curtain call!

Drake
Honestly though, we have no words.

Steve-O
The worst part? This one’s on Steve-O’s own back!

Deadmau5
They say that you should never wear the tee shirt of the band you’re seeing in concert — so why would you wear the tattoo FOREVER?

Robert Pattinson
Is it just us, or does it seem like everything was just swell until the left side was completed?

Nicki Minaj
Think her Minajesty was hoping that not only would her biggest fan get a tattoo of her, but also post a YouTube video of the experience? Because that’s not creepy at all…

So that just goes to show you, guys: Think twice before getting inked. After all, you never know what might look crazier: You, or your tattoo! Would you ever think to ink your fave celeb? Which of these tats is the worst?