23 April 2013: Joining Phillip Schofield and Holly Willoughby on the ITV This Morning sofa to review the headlines today were Showbiz editor Gordon Smart and broadcaster Verity Geere.
First for discussion was the latest on the Boston bombing suspect Dzhokhar Tsarnaev who has now been charged with the crime. If convicted he could face the death penalty. Phil commented on the relevance of the news from Canada about two men charged with plotting a terrorist attack on a passenger train with support from Al Qaeda. The suspects, Chiheb Esseghaier, 30, and Raed Jaser, 35, were arrested in Montreal and Toronto on Monday. They allegedly planned to derail a passenger train in the greater Toronto area.
Phil made the point that there must be a lot of terrorist attacks that the authorities do prevent and that we never know about; that perhaps we were deliberately told about this one to silence the critics of the Boston bombing who suggest the authorities don't so enough to stop these attacks.
Next up for discussion was the biting saga involving Liverpool's Luis Suarez who was allowed to play on at the weekend despite having bitten another player during the match. Gordon reminded us that Suarez had done this before, that he clearly had a big problem and that Liverpool FC need to address it. Phil commented that fines make no difference, that Suarez is such a good player that he will get away with it. Phil also then told us reports of a schoolboy who yesterday bit another pupil and claimed he was 'doing a Suarez'. Holly highlighted how influential players are on young people and how they need to set an example.
The suggested reforms to nursing were talked about next - with the Royal College of Nursing saying it was 'stupid' of the Government to suggest nurses should do a year of cleaning and hands on caring first. Gordon mentioned the Stafford Hospital case and that not all nurses are bad but that some clearly think it's not their job to clean up after patients. Holly said people ask the government to do something about a problem and then when they do they just get criticized for it. Verity reflected on the cost of the training involved but said it was needed. Phil said reports were that Jeremy Hunt had claimed the RCN had failed to respond to the criticisms made of it in the Francis Report.
Lastly, Phil and Holly compared their mugs of tea. A poll for WRVS, a charity that provides support for older people, revealed 35% of people like their tea to be mid-brown, with only 3% preferring their tea very milky. Phil said he likes his so strong the spoon can stand up straight in it - and Holly showed her Earl Grey tea to be weak and milky.
The first main topic of the day was debated by two Katies. Katie Waissel - former X Factor contestant - and Katie Hopkins, journalist, discussed whether tattoos make you a bad role model. The debate was influenced by a report that the band - One Direction - had asked fans to send them photos of their own tattoos. A spokesperson for the band later said it had been a Tweet mistake and the message was removed from Twitter.
Phil mentioned how big name celebrities like Justin Bieber, Rihanna and Cheryl Cole all have tattoos and are role models for young people. Katie Hopkins was blunt and clear. She said she would not employ someone who had tattoos because she thought of tattoos as graffiti and disrespectful. Katie Waissel immediately interjected and said she disagreed. She told us she has about 15 tattoos.
Holly asked 'Should a job be about how you look?'
Katie Hopkins replied: 'Yes. Tattoos mean you are attention seeking. When I ask young people what they want to be when they grow up - half of them say they want to be a celebrity'.
Katie Waissel said she was proud of her tattoos - that some are in memory of her grandfather - including the one of a lady in stockings and suspenders on her arm. She said she thought of them as body art - not graffiti.
The programme ran a quick survey during the interview. Viewers were asked if they thought having tattoos makes a person a bad role model. 18% of people who voted said yes, while 82% of people said no.
Posted by Unknown at 02:29 No comments:

Rapper Wiz Khalifa and Amber Rose are now bound together by a tattoo as well as an approaching baby.

Amber Rose is pretty in ink.
The model got a portrait of fiancé Wiz Khalifa, real name Cameron Jibril Thomaz, tattooed onto the back of her arm on Wednesday.

"Anotha week Anotha Tatt with @bobby_serna" Amber Rose is getting a tattoo in this INstagram photo from April 2013.

"True Love #Cam&Amb :- )" the 29-year-old tweeted, posting a photo of her black-and-white tribute to the "Black and Yellow" rapper.

Tattooist Bobby Serna also tweeted his thanks to Rose for coming to his studio, and posted a photo of himself posing with Rose on his Instagram.
Rose and Khalifa welcomed their first child, Sebastian "The Bash" Taylor Thomaz, in February. The two announced their engagement in March last year.
It's not Rose's first time going under the inking needle. The blond beauty also got a portrait of her mother on the inside of her arm. She also has a picture of two pugs on the top of her left arm.


Read more: http://www.nydailynews.com/entertainment/gossip/amber-rose-tattoos-fiance-wiz-khalifa-face-arm-article-1.1321925#ixzz2RHGQOUHG
Posted by Unknown at 02:36 No comments:

Celebrities With Tattoos of Other Celebs

Photos of Ryan Cabrera's newest tattoo circulated Monday, showing the singer chose to ink a photo of another famous Ryan -- Ryan Gosling -- on his right leg. The tattoo made headlines for being a surprising pick, but Cabrera isn't the only celebrity that has chosen to ink another star's face on his body. 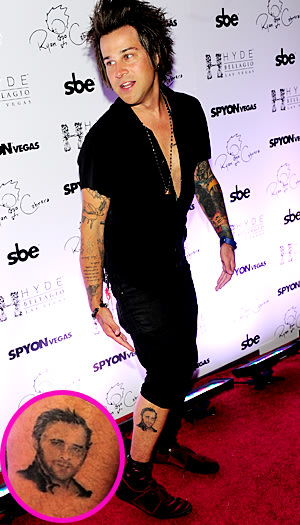 Ryan Cabrera (FilmMagi)David Beckham's many inked designs include one of his wife, Victoria, on his left arm. The tattoo depicts Posh Spice in lingerie along with the words "forever by your side." Another example of a husband demonstrating his eternal love isDean McDermott, who chose to get his wife Tori Spelling's portrait tattooed on his left tricep.
In perhaps one of the weirder body art homages, Steve-O has copied two of Angelina Jolie's iconic tattoos. The "Jackass" star has "Billy Bob" tattooed on his left bicep, and while Jolie eventually got her version of the ink removed, Steve-O still has his prominently on display. He also has the Khmer script Angelina had done in honor of her son Maddox on his back, right above the tattoo he has of his own face.

And in an example of a star inking another star on their body and then later having regrets is Megan Fox, who recently spoke out to Esquire magazineabout her decision to have her Marilyn Monroe tattoo removed. "I started reading about her and realized that her life was incredibly difficult," she explained. "It's like when you visualize something for your future. I didn't want to visualize something so negative."
Posted by Unknown at 08:39 No comments: