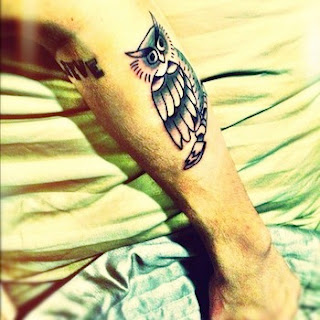 Justin Bieber has gotten another tattoo. The “Boyfriend” singer revealed a picture of his new ink, which marks his eighth piece of body art, Wet Paint reported on Oct. 29.
“Before the paps get me,” Justin captioned the photo of his new tattoo, which is an owl on his forearm. Bieber fans know that their idol has become a lover of tattoos, and is reportedly getting his girlfriend, Selena Gomez, who has 2 pieces of body art, into the act.
Justin Bieber’s other tattoos include a bird, and a spiritual tattoo on his calf. Now, fans are wondering if Justin will continue to add to his ink in the coming years, and eventually end up with an arm sleeve like Adam Levine, or if his hobby will die out as he matures.
Bieber’s fans have mixed feelings about his body ink. However, most of his fans enjoy the art, and appreciate that it has meaning to Justin.
What are your thoughts on Justin Bieber’s eighth tattoo? What do you think the owl means?
Posted by Unknown at 08:00