Most Famous Celebrities with Tattoos 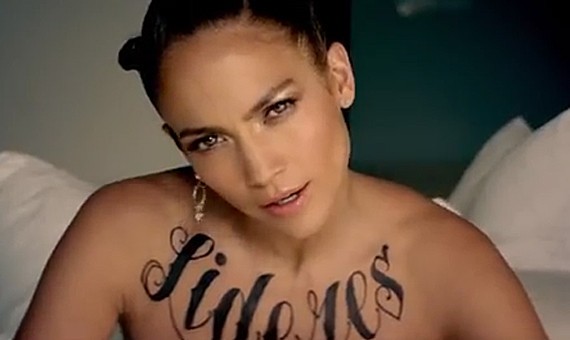 Shocking pictures of Maid in Manhattan star, Jennifer Lopez inked with massive tattoos across her collarbone and her back rocked her fans and followers on 4 May, 2012. The 42-year-old had the word Lideres written all across her collarbone while her back featured a massive skull/dragon-type logo.
Later, her fans heaved a sigh of relief as they realised that the tattoos are temporary and were only painted for her Follow The Leader music video.
Although JLo's tattoo is temporary, a number of stars in the industry are known for their love for getting inked. Be it the Buddhist Pali incantations written on Angelina Jolie's shoulders or the recent Scarlett Johansson tattoo, tattoos have intrigued and fascinated celebrities for long.
Jolie's love for tattoos is well-known as she has at least a dozen tattoos over her body. Each one of her tattoos has a special meaning although they are covered up by makeup during shooting.
One of her famous tattoos is a 12-inch-long, 8-inch wide Bengal tiger tattoo on her lower back. It was done on July, 2004 in Bangkok during a two-hour session by tattoo artist Sompong Kanhphai who also blessed it by chanting an ancient hymn.
Actress Megan Fox has over ten tattoos. Her most notable tattoo would be an Old English text inked on her right scapula which reads: "We will all laugh at gilded butterflies." The fragmented quote was taken from Shakespeare's King Lear Act V, Scene III.
RnB singer Rihanna, on the other hand, has an Arabic tattoo which reads: "Al Hurria fi Al Masee". The saying translates to: "Freedom in Christ".
Another celebrity known for her craze for body art is Evan Rachel Wood. One of her most popular tattoos is the one on her back which reads, "All that we see or seem is but a dream within a dream". The quote was taken out from Edgar Allan Poe's writing.
Posted by Unknown at 05:00