Having Fun With Temporary Tattoos 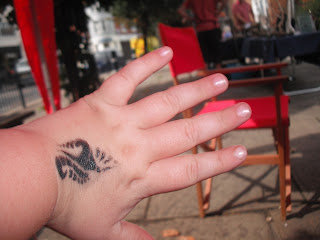 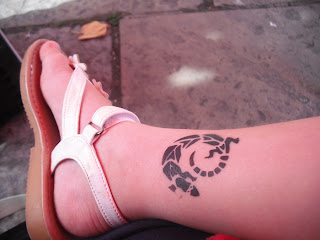 A lot of us don't want to take the step of getting a permanent tattoo, and even if we do, we really want to try before we buy, which isn't possible when you get a permanent tattoo. So for that reason, temporary tattoos are a great way to partake in the tattoo craze without having to commit your skin to a permanent image, or try it to see how it looks if you eventually want to get inked permanently.
There are several ways to receive a temporary tattoo. One is the obvious one we may have already participated in with our children, where we get a simple transfer, wet it, and they have an instant tattoo. Others get them airbrushed on using a stencil, or maybe colored on using body paint, body pencils, or body crayons. Some of these can look pretty good if you have a good artist doing it.
Some tattoos have even been used recently for children's safety, with parents putting a tattoo on the kids and including their cell phone number if they get lost in a crowded place, which has been known to happen. The latest craze with temporary tattoos has been with henna, which can look very good, but they usually have a brownish, orangish or burgundy type color, not really reaching those dark blue or black colors many people desire.
One thing that we all must be careful of is the false or "black henna," which really doesn't exist, but is marketed as such. It contains the chemical para-Phenylenediamine (PPD), which is used in a number of cosmetic products, among other things.
This can be dangerous and damage the skin, and is illegal for tattooing in most places. The key point to remember is there is no such thing as black henna, it's only PPD being mixed with true henna, to give the illusion that it is actually a real product.
PPD can permanently damage the skin, and leave the outlines of a tattoo on your skin for the rest of your life. Be careful especially in resort and tourist areas where tattoo artists advertise there wares. Some children have been tattooed and been left with permanent marking or scarring from the process. It could happen to adults as well.
Anyway, this isn't said to take the fun out of temporary tattoos, just to let you know to be cautious when going about your business.